As has been heavily discussed in the press, Germany has decided to buy the "Tax Fraudster CD". In other words, the German government has decided to buy a CD containing data on alleged tax evaders, even though the information being sold was illegally gathered. The government intends to get wise to those who "forgot" to mention some foreign income. Is the policy legally permissible? May the state make common ground with criminals to catch other mal-doers? 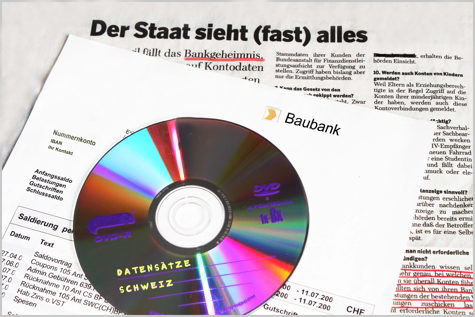 The question is an issue that many lawyers can discuss for hours and hours, and hours again. Many lawyers have developed a lot of theories, explanations, and justifications to this question. Practical history has shown that this topic has not been prudishly treated. The policy was to combat crime while dealing with criminals.

In many areas of criminality, e.g. combating drug traffic, organized crime, knowledge can only be gained when covert investigators - at least apparently - make common cause with criminals in order to keep in touch with this dark milieu. The courts have regularly accepted this.

How is the current purchase from the data-CD from Switzerland to be judged?

A ban on taking evidence can relate to

The Federal Constitutional has judged several times that illegally gained evidence is not because of that automatically unusable. Pursuant to case law, a ban on using certain evidence is only constituted when weighting all incidents of an individual case lead to the result that employing such evidence is utterly inconsistent with legal order. Following this "doctrine of weighting" almost any result can be explained. However, this doctrine has to be confronted with:

Now, the magnitude of the alleged offenses plays an important role. As an example, the BVerfG held in its judgment of July 28, 2009 (re 2 BvR 2225/08) that use of exhibits is permitted even when they derive from an illegal search in an apartment. The court also emphasized that prosecution is not permitted at any price. It all depends on the circumstances in the individual case. The rule of law may not be circumvented!

The problems with this weighting in the individual cases are evident. The blurriness of the weighting criteria have the danger that general considerations of equity in using illegally obtained evidence will typically weigh heavier. This then raises further questions

For this article, it is important to report that a lawyer charged Chancellor Merkel of incitement to receive stolen goods. Legally this charge is without ground due to fact that electronic data are not considered as things in criminal law.

Fruit of the Poisonous Tree Doctrine

It can be expected that this fraudster CD will disclose further tax crimes. When one person has been caught with undeclared funds at Credit Suisse, it is not unlikely that this person will have other illegal, while not declared income, accounts. Can knowledge so obtained be held against you? In the Anglo-American law order, the doctrine "fruit of the poisonous tree" will prohibit this information being used against you. However, in Germany the opposite is the case. It may be used against you.

Get Your Personal Tax Fraudster CD

The tax-CD is the gossip du jour. The Internet provides nothing that does not already exist. A Swiss man is selling a program called "tax fraudster 2010". When the program starts, you simply choose the requested country and automatically bank details, transactions of the last 15 years to dubious holdings in the Caribbean of all tax fraudsters in the neighborhood will be listed. When you are smart, you can even even get ahead with this. But take a look for yourself: Get your own fraudster CD here !

N.B. Do not forget to declare this income in your next tax return...