While almost everybody else in Europe is hyped up with excitement about soccer, we have – in spite all resistance – become affected from this fever as well. Excuse me, yes, not just “soccer” but the Euro and World Cup. Since we are all about law, we would like to introduce you to the most important rules of the tournament and individual games. After having studied this article, you can dare to ask further questions of any soccer fan in among your acquaintances without having to show that you are still a rookie.

Course of a Game

The whole event starts with the Preliminary Rounds. All participating nations are divided into four round-robin groups with four teams each. The allotment to a certain group is done by the drawing of lots. Each team plays each other member team of its group. One victory brings three points, a tie awards one point and a defeat brings no points. If after all group games two or more teams end with the same score, placement will then be determined by several criteria. For example, by the points won through direct matches, after that the number of goals obtained through direct matches, and by the number of goals of all groups.

Whenever two competing teams obtain the same number of points in quarterfinals, semi-finals, and in the finals, then the game will be extended twice for 15 minutes. If still no goal difference is obtained by the conclusion of the extensions, the game becomes really exciting in the penalty shoot-out. Note: The rather unpopular "Golden Goal" was abolished after the EM 2004 – to the joy of many fans. 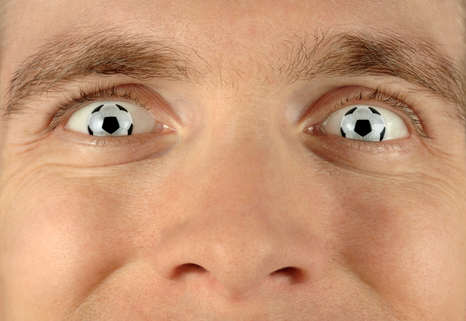 The winner is the team which gathers the most goals within the regular playing time, obtained after extension, or after the penalty shoot-out. One receives a goal, if the ball completely passes the goal line between the gateposts and underneath the crossbar. The referee has the task of supervising the obeying of the rules. He leads the entire tournament and can also impose disciplinary measures (booking, sending-off) against the players. The referee is supported by two assistant referees. Once the referee has made his decision, then it is in principle final. He may only change it when he finds out it was wrong or when, after consulting with an assistant referee, he considers it needed. However, a change in his opinion is only permissible as long as the game is not over. Even if the decision later turns out as objectively wrong, it remains in effect., That is why it is dubbed "decision on facts".

The game begins with the kickoff. This happens also after a goal, as well as at the beginning of the second half and each extension. The opposing team kicks off after a goal. Before the kickoff, all players are in their half of the field, the opponents have to be 9.15 m away from the ball. The ball lies on the kickoff mark in the center of the playing field. After the referee gave an indication, the ball may be played with the foot. Whoever first played the ball, may not play it immediately again after the kickoff, i.e. not before another player has played it. The same is true for standard situations like (e.g. corner kick, free kick).

This is not to be confused with the so-called goal-kick. An interrupted game is continued with a goal-kick. It is arranged by the referee, when the ball was touched last by an attacking player and passed the goal line in the air or on the ground and no goal was achieved. The ball is played by goalkeeper or another player of the defenders from the goal box.

The so-called referee ball happens, when the game had to be interrupted, without the interruption being based on a rule offence by a team, e.g. after a player is injured or if the gate slat breaks. In this case the referee lets the ball fall, where the ball was during the interruption of play. When the ball hits the ground, the game is continued.

Hint: Via a throw-in no direct goal may be achieved. In such a case, the throw-in would be invalid. The referee decides, depending upon the situation of the game, on goal kick if the ball entered the goal of the defending team or on corner kick when it’s into one’s own goal.

The corner kick has a special thrill. The referee orders it, if the ball crossed the goal line outside of the goal posts and crossbars and a defending player touched the ball last. In this case, the ball is put into the corner circle and then played by a member of the attacking team. The opponents must be keep a distance of at least 9.15 m from the corner circle. Before the player kicking from the corner may play the ball again, another player must have come into contact with the ball.

A player is offside, when he is closer to the opponent’s goal line than the ball and there are not two defense players closer to the goal line (not the goal) than he. On the other hand, there is no offside, when he is playing in his own half,. The offside position of a player alone represents no violation of the rules. The player will only then have to receive a penalty, if the referee has the opinion that at the time of playing, he or his team has any kind of advantage from his offside position. If a player however receives the ball directly from a throw-in, goal-kick, or a corner kick, he is in conformity with rules. In these last three cases, there is no offside. If the referee considers the offside position against the rules, the opposing team receives an indirect free kick.

The opponent typically gets a direct free-kick when a player carelessly kicks an opponent, thoughtlessly or disproportionately trips him up, pounces on him, beats on or pushes him. The same is true when he touches the opponent, holds him, spits on him, and purposely plays the ball with his hand plays while tackling him in front of the ball.

Whenever a player commits one of the named offences for defense within his own penal-area, the opposing team then gets a penalty kick. Germans colloquially call this penalty kick also Elfmeter (eleven meter), because the kick-off mark for a penalty kick is placed 11 m away from the opposing goal. The penalty kick will be played from that mark – irrespective from where the ball was originally. This kick will be played even if the playing time has already run out. The goalkeeper, facing the opponent, has to remain in the goal until the ball has been kicked. The opposing team's remaining players have to stay outside the penalty-area, therefore behind the kickoff-mark and at least 9.15 m from the ball. On the signal of the referee, the penalty kick is played.

Admonitions and Sending off

The referee can impose disciplinary actions as well as admonitions and ejections against a player. The referee signals an admonition or ejection by showing the player the red or yellow card. The red card and yellow card can be shown to a player as well as a substitute from entering until leaving the game field.

This yellow card is imposed against a player, when he, in the opinion of the referee, behaves unsportsmanlike, repeatedly violates rules, delays the resumption of the game, or does not keep the mandatory minimum distance at an corner-kick, free-kick, or throw-in. The referee can also punish protesting and complaining with a yellow card.

“Violence” is understood as a forcible play that has nothing to do with the roll of the ball and is committed against an opponent, official, or another player. Such will typically be spitting on another player or preventing a goal via inadmissible use of hands, the referee can eject him with a red card. Afterwards, he cannot continue in the current game and is usually blocked for the next game, too. These field and place references are beyond me and make no sense to me as written. As I don’t know soccer and hence what they mean I can’t rewrite them. I don’t know how important (how often this field reference happens or whatever) but even without knowing this distinction, soccer is just as enjoyable. As far as I am concerned leaving it out does not diminish your explanation. Keeping it in where it is not understandable does diminish your explanation.

The foul is committed during the current game, when with body-contact a player thoughtlessly or with exaggerated hardness proceeds against an opponent, without pulling in his elbows and arms. A coarse foul is committed by whoever acts brutally and unduly roughly against an opponent, for example when he jumps on him. A coarse foul is punished with a red card and ejection. In principle, it will not be decided to give the offended team an advantage unless a clear chance for a goal existed. The game will then be continued with a direct free-kick or penalty kick.

Also with the so-called “dangerous game”, ejection can be the order of the day. Here, there is no body contact between the players. The player plays in such a way, that he possibly might hurt somebody, and the opponent will therefore be prevented by fear of an injury from playing the ball. Precondition for a disciplinary action is here that a disadvantage arose for the opponent because of the dangerous play. When the opponent loses a chance at goal because of a dangerous play, the referee can eject the offending player from the field.

One understands a forcible game, that has nothing to do with the roll of the ball and is generally committed against a player, an opponent, an official or another person. The violence is punished with the red card and ejection. If it was committed against a player, then the game will be continued after an indirect free-kick. If the player became violent against an opponent, the referee or another person, the game will be continued after a direct free-kick.

There are several kinds of use of hands possible. If the use of hands is utilized to score a goal, this is regarded as unsportsmanlike behavior and will be punished with a yellow card. If a goal of the opponent is prevented by the use of hands, the player gets a red card. The game is continued with direct free-kick or a penalty kick.

During the European championship as executed in the quarterfinals, semifinals, and finals if no team scored more goals than the other after the twice 15 minute extensions. The referee decides which goal is to be used for the Penalty Shoot Out by toss of a coin. The referee-assistants and an official write down the numbers of the players, who will execute the shots.

The coach nominates five players that participate in the Penalty Shoot Out and determine also the sequence, in which they shoot at the goal. Each team alternates at shooting at the goal defended by the opposing goalkeepers. During the shoot out, the goal-keeper may not leave the goal line. That team wins, when it scores an insurmountable lead. If there is still a tie after five rounds, then another round will be started. However, the goals will then be crucial per round and per player-pair, i.e. when in a round one player makes one goal and the other doesn’t, the team wins.

Other Relevant and Corresponding Articles