This page will introduce you to the requirements of obtaining a German passport, or more in the legal thinking, German nationality.

What are the requirements for getting a German passport? 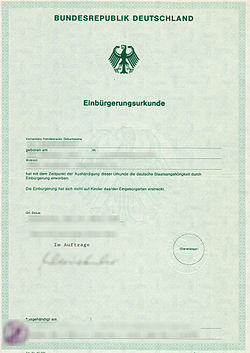 When do I have sufficient command of the German language? Do I have to speak almost as well as a German?

I have just been granted German citizenship after living here for nine years. I married my non-German wife two years ago having a gorgeous daughter from a previous relationship. What about my wife and child? Do they have to meet all the conditions?

No, your wife and daughter can be naturalized under fewer requirements. But they still have to meet all normal conditions, except for living in Germany for at least eight years. Children under 16 are exempt from making any pledges to German constitution or its democratic order.
§§§

My non-German wife just gave birth to an even more pretty little boy. Which citizenship will the boy have?

Your child will at least receive German citizenship because it is the child of a German parent (§4 I 1 StAG).
§