Business in a Pedestrian Zone

As you surely know, pedestrian zones are no law-free zones. If you want to make any kind of business, be it “only” to distribute flyers, you might need permission. These questions are answered in the law on streets and ways of the federal states. On top of that, communities might have also set-up their own regulations in special by-laws. In other words, what is chique in Berlin might be disgusting in Munich – i.e. not permitted. 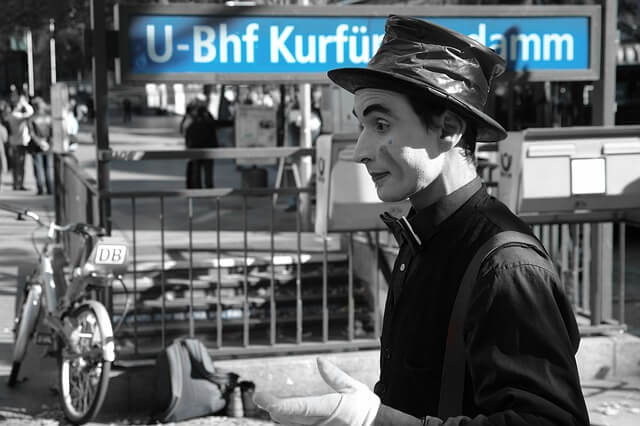 Is there a general orientation, a rule of thumb, what kind of business activities are permitted in pedestrian zones?

Be it an information booth, advertising board, Bratwurst stand, ice cream van or “just” a traveling hawker, all that is subject to permission for special use (“Sondernutzung”).
§

Can’t I put my little sandwich billboard just in front of my store on the street? It won’t really disturb anybody.

I regret not. OLG Karlsruhe (judgment of April 15, 1976, re 3 Ss (B) 231/75) ruled that a triangle-like stand disturbs the interaction among other persons on the street and is no public use anymore.
§

You say that the pedestrian zone is for communication. So may I not set up an information stand?

Sure you may do so but best would be if you have the correct permission. OLG Hamm (judgment September 26, 1978, re 2 Ss OWi 1157/78) considered this as special use subject to permission.
§

We applied for an information stand to promote that American voters should register for the next presidential election. Our city’s administration denied because their by-laws forbid any and all political activities downtown. How meaningless… Can this be?

Well, yes and no. OVG Lüneburg judged (March 11, 1985, re 12 C 1/84) that a total ban of promotional activities in city centers in their by-laws contradicts the purpose of pedestrian areas: interaction and communication among persons. However, just because a total ban of political activities may not be, you cannot create a reverse conclusion that you are now entitled to have such stand downtown. If you do not block traffic and / or communication among other persons and no other reasons for denial exist, you ought to get the permission.
§§

What about distributing flyers or similar brochures?

There is no clear general rule in Germany. In Berlin, you need a permission pursuant to §8 Street Cleaning Act) unless it is a political, social, religious activity. The Federal Constitution Court decided that distributing flyers in Hamburg can be done without special permission. The background to this decision was Hamburg’s bylaws had determined that any and all activities in pedestrian zones were subject to permission. The BVerfG (judgment October 18, 1991, re 1 BvR 1377/91) scrapped this rule in the bylaws because the scope of the regulation was too wide. Besides, the court could not determine how distributing fliers can affect or endanger the security in traffic.
§§§

Summer time with its warm temperatures is the main business time for me. Do I need any permission to put extra tables and chairs outside my restaurant on the sidewalk?

OVG Lüneburg judged (September 3, 2003, re ME 193/03) furniture or planters or showcases do not really have anything to do with pedestrian zones but are very common and are therefore to be tolerated.
§

I have a shop downtown and would like to put out boxes with goods out on the sidewalk in front of my store. Do I need permission?

The Administrative Court Stuttgart (September 15, 2009, re 13 K 1166/09) decided that retail shops can place their goods in front of their shop on the sidewalk or pedestrian zone, if the box is not higher than 1.5 m and reaches no more than 1 m into the zone. Pedestrians are to have enough space to stroll around it.
§

I got a good idea how to legally carry out a business in a pedestrian zone. I’ll attach a hot dog cooker to my bike and pull it through these streets. Hah! I will beat the German authorities.

Sorry, to disappoint you but, in 1996 somebody else already had that idea. The VG Braunschweig judgment June 17, 1997, re 6 A 61003/97) denied such permission to a dealer because it is to be assumed that others will want to follow his example and in the end too many of such dealers will be blocking the streets. Such will turn out to be only a “sales street” , not a way for pedestrians anymore.
§

Arts on the Street

I’m a street musician. Recently a cop shooed me away because I was doing “business” on the street. All I was doing was leaving my instrument case open on the street and playing my sax. That’s not business. I was not on a stage performing.

A pedestrian zone is actually a place for strolling around and not a stage for a performance. Such is the case when musicians set up their instrument box to collect coins or even sell CDs. This is an artist’s profession, to be paid for playing or for his canned music. Pedestrians have to stop or walk around such performances. However, playing music on the street cannot be totally forbidden as long as the constitutional guarantee for the freedom of art exists (art.5 III GG).
§

Thanks for the answer! It was so informative a supreme court judge would be proud of it. Could you please explain it for me – a non-lawyer?

The BVerwG (on November 9, 1989, re 7 C 81/88) decided that a lady spontaneously cutting silhouettes was to be granted a special permission to perform this art in a pedestrian zone. Her activities were covered by the constitutional freedom of the art (art. 5 GG). Her cuttings expressed her artistic activities based on fantasy, intuition, and artistic knowledge. Besides, this lady needs to find her models in the zone to perform her art. Nevertheless, the business character of her activities prevails and not interaction among persons. She is entitled to be granted a special permission for cutting silhouettes.
§

When business is to be permitted in the German “piazza”, can’t beggars be forbidden to stretch out their filthy hands?

While artists perform an activity and request a payment, beggars do not give an equivalent. They allege an “emergency” that you might donate for their need. I understand that you feel pestered but that does not mean that begging is forbidden. In contrary actually, at least “silent” begging is permitted. Just silently stretching out a hand or a cup does not infringe a law. You will have to cope with that. What you do not have to accept is when you are physically badgered to give money. In such case, the police may remove such person (VGH Mannheim, judgment July 6, 1998, re: 1 S 2630-97) on the grounds of disturbing public order and safety.
§§.