Fasenacht from the Perspective of Civil Law

"Serious Celebrating" can have consequences. This is especially true in the carnival strongholds along the Rhine. On the three or five crazy days 100,000s of persons are on the road. It is loud and narrow, a lot of alcohol is flowing and that way after midnight. So, what once began as a merry sing-along can end up in front of the judge's bench. 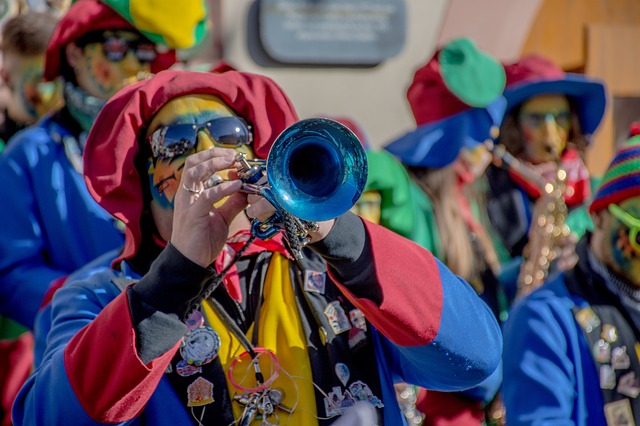 Whenever you visit a mass party, not only in the Cologne Arena, where a lot of alcohol is being served you have to reckon that beverages fall to the ground and it gets slippery. The host cannot and does not have to guarantee 100% safety against such accidents. The Higher Regional Court in Cologne on June 28, 2002 - 19 U 7/02 dismissed a case for damages with exactly this argument.

The organizer of a carnival procession does have to take responsibility for all damages that can happen along its way. The organizer only has to make appropriate and reasonable precautions for mass events. There is no duty to block the whole street since the individual wagons only pass slowly and there is no special danger to be aware of (AG Waldkirch). So when you hurry after a wagon and slip: tough luck.

and don't throw them. Otherwise you might be sentenced for assault (§223 StGB). In some cases, such can be causing bodily harm by dangerous means (§224 StGB). The County Court of Cologne sentenced a person to six months jail on probation in 2004 because it considered a barrel of beer as especially serious case. The court held in 2004 that a beer barrel is a "dangerous means".

The organizer of carnival procession cannot be held responsible for all kinds of imaginable risks like a bang trauma from a candy canon. A lady suffering with tinnitus sued the organizer for damages. The LG Trier held that a carnival procession is always loud, the lady could have protected herself by stepping back from the end of the sidewalk (of June 5, 2001, re 11 S 18/01). As the VG Frankfurt (of February 12, 1999, re 15 G 401/99) decided, such procession may be loud and any alleged "noise pollution" has to be tolerated. Residents alongside the parade cannot demand that the noise level not be louder than 70 decibels.

His Honor Hans Gert Neu, judge at AG Cologne denied a case, where residents wanted to have peace and quiet after 10 p.m. He argued that such is impossible in Cologne during the three crazy days (Rosenmontag, Fassenacht, Aschermittwoch). It can therefore not reasonably be assumed that the law will be in act during those days - so the judge. The Cologne tabloid "Express" considered "Cologne" judgment worth a medal the "Närrischen Oskar 97".

A barkeeper in Cologne is not required to admonish loud guests on the weekend of carnival that they hush down when they leave or even remove them from his bar (AG Cologne 532 OWi 183/96).

However, in other, less humoresque, areas of Germany, these "crazies" play no role whatsoever and are "normal" days. The administrative court Freiburg so judged on January 28, 2005 (re 1 K 2854/04). It went so far as to deny any danger to Fassenacht when not granted fool's freedom on these days.

Claims for damages for pain and suffering for an injury coming from a box of candy do not exist held the County Court of Aachen (November 11, 2005, re 13 C 250/05) because whoever watches a carnival's parade as a spectator silently agrees in such risk of being endangered. It is also customary, not only in Rhineland area, to throw other objects than candy like praline boxes or sealed salamis.

Hearings on Weiberfastnacht at 11:11 o'clock are not just a bad joke ...

When a family judge schedules a hearing at the beginning of carnival on the 11.11. at 11:11 a.m., he does not show that his not taken the case to be heard seriously. This judge is not biased and cannot be denied on the grounds of prejudice (§42 ZPO). Such assumed the single mother of a minor wanting to sue for support. The Higher Regional Court deciding on the application of denial, held that it can be expected that the parties in a legal dispute may have humor as well.

A carnival prince, on the event of his honorable activity, published a prince magazine in which paid advertisement was included. He was considered to be an entrepreneur and therefore this income was subject to taxation. The actual turnover is to be considered as annual turnover when earning money is clearly only for a certain period of the year - so the Federal Tax Court in its judgment of October 27, 1993 (re XI R 86/90). The prince also had a financial advantage: he was allowed to deduct the expenses for obtaining the ads and printing costs.

Von nix kütt nix (From Nothing Comes Nothing)

Donations - in contrast to membership dues - to charitable carnival associations are tax deductible! So, freely donate! And when you have sinned too much, the church will gladly accept your donation.

Finance Minister is not Invited to a Company's Carnival Ball

When an employer invites his employees „with partners" to a carnival ball then also such money spent for the not employed spouse is wage tax free, because it is to be considered as an "imposed enrichment" and the operational interest was predominant (FG Cologne, re 3 K 110/97).

Whoever visits a carnival show with unmanned wardrobe is a fool to believe that he can be reimbursed from his private liability insurance when the jacket with his car keys are stolen. Such gross negligence can only be punished with no payment (LG Cologne, 24 O 307/96).

Garage your Car! The Nubbel Burns...

Whatever license the jester may have on Ash Wednesday, but surely not to damage a car when burning the "Nubbel". The "Nubbel" is a straw puppet to be burnt on Ash Wednesday to make good for the jester's sins for the last days. The LG Cologne held the owner of the bar liable. It was not a sufficient warning to hang out a "Nubbel" in the entrance of his bar. What happened was that a lady parked her car in front of a bar where later in the evening such straw puppet was burned and made several awful damages to the polish of the car. Clear signs should have been hung up. The court also saw no joint liability that the lady parked her car in front of the bar because this would not rise the danger for damage to a car.

and there subject to taxation. The Federal Social court compared these carnival "meetings" to theater and music agencies. The service of the speaker, so BSG are art (re 3 RK 17/96 and 3 RK 22/96). The consequence: the organizer has to pay contributions to Künstlersozialkasse. This organization insures self-employed artists and publicists for social security.