Autumn is known to be a turbulent time of year. If most of the summer has been drowned in water, you can anticipate an increase in humidity from moisture up to the formation of drops. Bad weather can therefore lead to legal threats - be it for pedestrians, motorists, homeowners, fashion-conscious people and many others. In order for you to really enjoy the autumn untroubled, we went out of our way to put together an autumnally colorful mixture of legally waterproof tips for you. 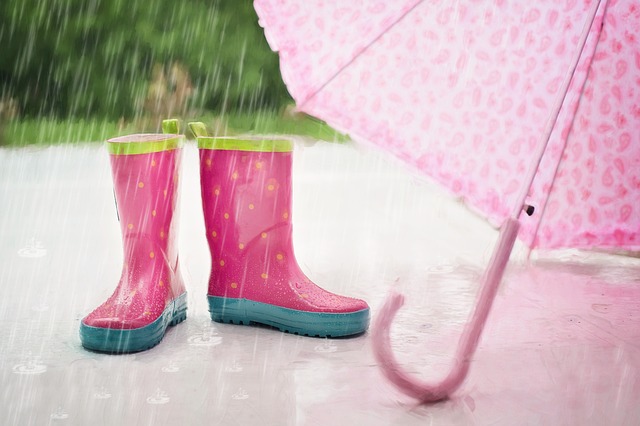 Water from the Side

An umbrella helps against water from above. But wetness does not always come from this direction: puddles on the roadside can make life difficult for pedestrians as well as car drivers. It happened that a passer-by had been splashed soaking wet by a car driving through a puddle. He was of the opinion that the driver should have driven through the puddle at walking speed. But the regional court LG Itzehoe, decision of February 24, 2011, re 1 S 186/10) decided against the pedestrian and in favor of the motorist. It is hard to imagine the consequences a different judgment would have had for the traffic flow if from then on every puddle would have to be passed through at a snail's pace!

Nevertheless, car and motorcycle drivers should not drive too fast during heavy rain. Otherwise, they may go down more quickly than they can get their foot off the accelerator. Ruts and blocked road drains promote aquaplaning. The presence of just a thin layer of water can be dangerous, making it possible to skid with a speed of 60 km/hr. LG Mainz held in its judgment of February 24, 2005 (re 4 O 76/04) that the state is usually not responsible for aquaplaning accidents. Your car insurance might be responsible for paying in the case of damage due to negligence. Your insurance typically does not have to pay in cases of gross negligence, however. LG Bielefeld determined in its judgment of May 15, 2007 (6 O 22/06) that if the insurance wants to deny payment, they will have to be able to prove that at the time of the accident, the road was covered with water.

Ready to Brake at any Time

When thick banks of fog cover the landscape towards evening or in the early morning hours, this idyllic peace can be deceptive. Drivers must not only observe the visual driving regulations. At this time of year, also be on the lookout for wild things. In the areas where a sign shows a stylized deer jumping, and generally in the countryside as well, you should be particularly concentrated on driving due to the potential for game crossing the road, and always be ready to brake. Your partially comprehensive insurance only covers accidents involving wild game pursuant to §2 Federal Hunting Act (Bundesjagdgesetz), i.e. red deer, roe deer, fallow deer, fox, wild boar, martens, weasels, hares and rabbits - but not reindeers. Fully comprehensive insurance also covers damage with feathered game, i.e. pheasant, turkey etc. LG Coburg ruled on June 29, 2010 (re 23 O 256/09), an accident with a squirrel however does not count as either a game accident.

Rain is not only a pain when it gets you wet, but also causes problems for homeowners. After a heavy rainstorm, the rain gutters of a house broke and the owner wanted to have them fixed by his house insurance. LG Coburg decided on March 16, 2010 (23 O 786/09) that the owner of a house had to pay for a broken rain gutter from his own pocket and not the insurer's account. His house insurance refused to pay and the court confirmed the insurer's opinion. The only pipelines that are insured are the ones leading into the municipality's sewage system. This was not the case in the trial in front of LG Coburg. So, the judges had to agree with the insurer.

Not all Good Come from Above

Before it gets really stormy, homeowners should have the roof thoroughly inspected by a professional, not only for water damage, but also to prevent roofing tiles from falling and causing damage. An example of what can happen is the case at LG Koblenz of September 22, 2006 (re 13 S 16/06). During a storm, a roof tile came loose, landed on a car parked in front of the house, and damaged the roof of the car. When winds with force 8 including wind peaks up to force 12 are blowing, the court assumed the roof was faulty and that the building owner did not sufficiently meet his safety obligations. In order to excuse himself, the owner had to prove that he has adequately checked and maintained the roof. An exception will be considered when natural Acts of God happen like tornados, hurricanes or similar happenings.

Getting prepared for the colder days in the year? Good idea. It makes sense to order heating oil now, during a period of low demand. For practical reasons, orders are often placed by phone, online and maybe fax. This kind of business is a so-called remote or distance business (§312c BGB). The consequence is normally that consumers have the right to revoke the contract within 14 days after delivery (§312g BGB) if they change their mind on the purchase. This is an exception to the normal rule: ordered is ordered. However, we have here two exceptions to the exception: §312g II no. 4 and 6 BGB. According to no. 4, you cannot revoke an oil delivery because the order will be mixed with the reserve volume in your tank. I do not see any possibility to differentiate which drop of oil was mine and which drop of oil was yours. LG Duisburg ruled on May 22, 2007 (re 6 O 408/06) that an oil delivery belongs to a class of raw materials for which price fluctuates a great deal in short period time, and upon which the supplier has no influence. Based on this, the general rule comes back into force: ordered is ordered.

Oilskin is not always Oilskin

In contrast to deliveries of fuel oil, you can withdraw from a remote contract on purchase of a raincoat, oilskin or rubber boots within 14 days. You can only "enjoy" rain, wind, and wetness when you have the right equipment: rubber boots and oilskins. Nevertheless, you better not overdo it with trying them on. If you do and you damage it you will be liable for damages if the vendor understandably communicated this to you. As BGH sees it in its judgment of December 9, 2009 (re VIII ZR 219/08), there is nothing wrong with a few minor scratches on the sole of expensive leather shoes or rubber boots. So, when the rubber boots fit like gloves, you are ready for a stroll in the mud.

Of course, during the turn of seasons the closet will also be affected. Bikinis, flip-flops, and miniskirts move aside to make room for sweaters, woolen scarves, and flannels in the closet. Sometimes, textiles have to be cleaned before they are stored for the next summer. AG Nordhorn had to settle a dispute in its judgment of May 29, 1985 (re 3 C 368/85) about an angora sweater. A woman's favorite sweater got lost at a dry cleaner. In the general terms and conditions, liability in the event of loss of the goods to be cleaned was limited to 15 times the cleaning price. Though the court generally did not complain about this stipulation, it nonetheless awarded the plaintiff full damages. Such a limitation of liability permissible is only if the customer is offered a corresponding additional insurance before conclusion of the contract.

Keep Distance when Lifting off

In autumn, kite flying is fun for young and old alike. This recreational activity should be carried out in accordance with important safety rules, however. Without a permission of the responsible aviation authority one may not fly kites higher than 100 meters, §16 Air Traffic Ordinance (LuftVO). Hang gliding is not allowed within a radius of three kilometers of airports, airfields, and gliding areas, and in the surrounding vicinity only with a significantly lower climb height. Kite flying is also taboo in the vicinity of power pylons, railway lines, and roads. Here you should keep at least twice the distance of the line length. If the kite line is wet, there is extreme danger when you come into the vicinity of power pylons!

Leaning far out of the Window

In autumn, kites are not the only thing that can fly up to airy heights. A Munich resident wanted to take a look through the open balcony door during the storm Kyrill had an inconvenient experience. As soon as he had stretched his head through the door, the storm promptly tore his hair piece away. He wanted to be reimbursed for his lost hairy piece from his insurance, but the household contents insurance did not want to pay out for storm damage, as the policy only covers damages inside a building. The man's downfall, according to AG Munich with its judgment of January 8, 2008 (re 261 C 29411/07) was that he had stretched his head beyond the building wall into the open air. The fact that the rest of his body was inside did not matter. AG Landsberg am Lech had to decide in a similar case on June 16, 2009 (re 1 C 327/09). When looking through an open window, a man's glasses had been blown away by another storm. So if you have loose articles of any kind, better keep a firm hold on the when times become stormy.

Low-Tech Solution for a High-Tech Problem

Drones are buzzing around almost everywhere nowadays and have become a pleasure / adventure for the users but also a nuisance for those down below. When a drone flies over your garden while you want your peace and quiet, persons are typically not amused. Recently, a Dutch startup Guard from Above is training eagles, the kings of the sky, to hunt for drones. Sjoerd Hoogendoorn, CEO of Guard form Above, states: "Jamming stations? Laser Canons? It's a low-tech solution for a high-tec problem. We apply the century old instinct of these birds, so the eagles will consider drones prey when on the hunt. Though the normal choice of food does not have several extremely quick rotating whirls, they just grab the drone and land with it in their claws. There is no danger for the birds because their claws have heavy duty scales developed to protect them against bites."

While thinking of nothing evil, all of sudden a drone was hovering over Rudi's garden. His children were playing in the backyard behind the high hedges. Rudi had reasons to believe that the drone's camera was either taking pictures or had taken pictures of his family. He could not notice the pilot - who was actually the neighbor hidden behind the high hedges. Rudi grabbed his rifle, aimed, and shot down the drone. His neighbor was not all excited about this and filed a complaint with the police.

The right of self-help of §229 BGB is not a carte blanche for material damage. You are entitled to protect yourself only when the three following pre-requisites exist to create an exceptional circumstance: